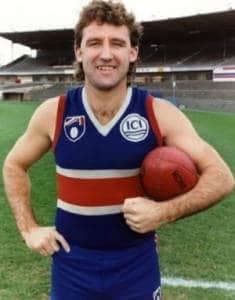 Doug Hawkins started his football career as a 17yo in 1978. He played 329 AFL games for
Footscray surpassing Ted Whitton’s record at Footscray. He was a great winger such that the
outer wing at the Western Oval is named after him. He represented Victoria 5 times, was a
winger and vice captain in Footscray’s Team of the Century, and has been inducted into the AFL
Hall of Fame.

He went on to play another 21 games for Fitzroy giving him a total of 350 AFL games. He then
moved on to coaching Bacchus Marsh.

He was known as a larrikan, and was a media personality in the 90s including The Footy Show
on channel 9 before moving to a rival show on channel 7. He stood for the Senate in 2013 for
the Palmer United Party.