Geoff Southby – 268 games for Carlton, 2 premierships, AFL Hall of Fame, member of Carlton’s
Team of the Century and one of the games hardest and best defenders. 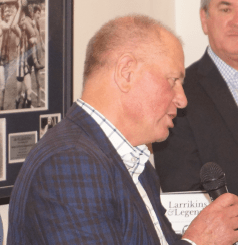 The photo shows Geoff marking over Neil Balme in 1972, Neil (a recent Odd Friday guest) got
his own back in the 1973 Grand Final.

Geoff continued his direct involvement in the game for some years including 3 years as a
specialist coach with Fitzroy.