Neil Balme started his football career in WA playing for Subiaco, and moved to Victoria and 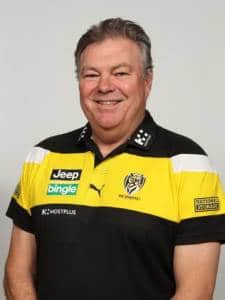 Ricmond FC in 1970. He played 159 games for Richmond including 2 premierships. He retired at
27 years. As a forward and ruckman he was regarded as skilled ,but tough and physical.

He then coached Norwood in SANFL from 1980-90 where they made the finals every year and
won 2 premierships. He then coached the newly merged Woodville-West Torrens to finals in
91-92 before returning to Vic to coach Melbourne for 5 years.

He became Football Manager at Collingwood in 1998 and was there for the Grand Finals in
2002-3. He became Football Ops Manager at Geelong in 2007 and was a key figure in their
2007, 09, 11 premierships , breaking a 44 year drought year 1. He returned to Collingwood in
2014, but then returned to Punt Road at the end of 2016 as GM of Football. Like at Geelong, he
has been instrumental in an immediate turn-around of the clubs fortunes with a Richmond
premiership year one, after a 37 year drought.

He is probably the most experienced and successful football administrator in the game. As a
player he was wild and tough, but his calm personality, rational demeanor and casual style has
helped in his extremely successful football career, & his popularity.