Wayne Johnston, born in 1957, came to Carlton in 1979 after being in the Prahran VAFA
premiership side in 1978. He went on to play in 4 Carlton premierships including ’79, his first
year at Carlton. 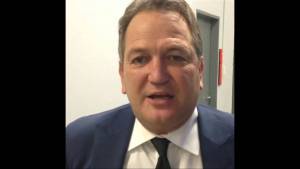 In 209 games, he was leading goalkicker in 1980 for coach Percy Jones, Best and Fairest in 83 &
86 (equal), captained the team 84-85 and was an all Australian in 1987. He is in Carlton’s Team
of the Century, Hall of Fame and a Carlton Legend. He is also in Prahran’s Team of the Century.
‘The Dominator’ was an outstanding big-occaision player, a brilliant hard running, aggressive
player ahead of his time.

After his playing career at Carlton, he played a few games for Sturt in SA but suffered through
injuries, and then moved to Qld where he did some coaching. On his return to Melbourne he
became the runner for Richmond for 2 years and married his wife, actress Kate Kendall.
He was as newsworthy off the field, and since his playing career ended. He initially got the
nickname of The Dominator ‘off the field’. He no doubt has many good stories to tell.